Real Madrid booked a place in the UEFA Champions League last 16 with a 1-0 win over a second-string Liverpool, with Borussia Dortmund joining the European champions in the knockout stage on Tuesday night.

With two matches left in the group stage, a first half strike from Karim Benzema was enough to give Real a 10th successive home win in the Champions League and maintain the Spanish giants’ perfect record in the group stage.

Liverpool went into the encounter with more than an eye on this weekend’s crunch clash against Chelsea in the Premier League, as Steven Gerrard, Jordan Henderson, Raheem Sterling and Mario Balotelli all started on the bench at the Bernabeu.

Real meanwhile had Gareth Bale back from injury and on the bench as Carlo Ancelotti’s side went in search of a 12th consecutive win in all competitions this season, while Cristiano Ronaldo aimed at equalling or breaking Raul’s Champions League record of 71 goals scored in the competition.

The Ballon d’Or holder had an early effort kept out by Simon Mignolet, who also denied James Rodriguez, while Kolo Toure blocked a goal-bound Ronaldo afterwards strike as Real made a bright start to the match.

That start was rewarded with a goal in the 27th minute, Marcelo receiving the ball from Isco before sending a cross to Benzema who simply guided the ball into an empty goal as Mignolet had been beaten by the cross.

Ronaldo then saw a 30-yard freekick saved and Benzema was denied by Mignolet off some poor Liverpool defending as Real settled with the lone goal lead going into the interval.

Mignolet denied Ronaldo again early in the second half, Benzema fired over from close range, Bale hit the crossbar and Ronaldo yet again failed to beat Mignolet as Real laid siege on the Liverpool goal but failed to find a second goal and settled for the 1-0 win.

The result puts Real on 12 points from four matches while Liverpool remain on three points in third place, behind Swiss champions Basel that defeated Ludogorets Razgard 4-1 in the other Group B match on Tuesday. 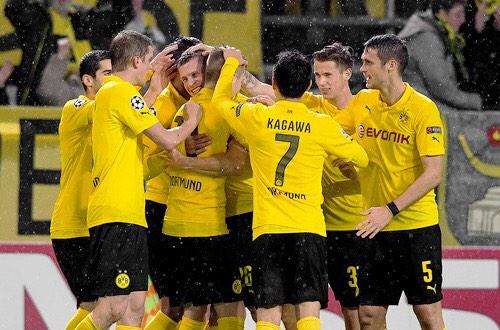 Real meanwhile was joined in the knockout stage by Borussia Dortmund, which put aside its domestic woes to also maintain its perfect record in the group stage with a 4-1 win at home to Galatasaray.

Goals from Marco Reus and Sokratis Papastathopoulos either side of half time put the Bumblebees 2-0 up and though Hakan Balta pulled one back for the visiting Turks, Ciro Immobile and a late Semih Kaya own-goal completed a 4-1 win for Dortmund.

Elsewhere, Benfica got a 1-0 win at home to AS Monaco but remain bottom of Group C with four points. The Portuguese club however got itself back in contention for a place in the knockout stage as a result.

Monaco on its part remain in second place with five points, four points behind Bayer Leverkusen that came away from Russia with a 2-1 win over Zenit St. Petersburg in the other Group C match.