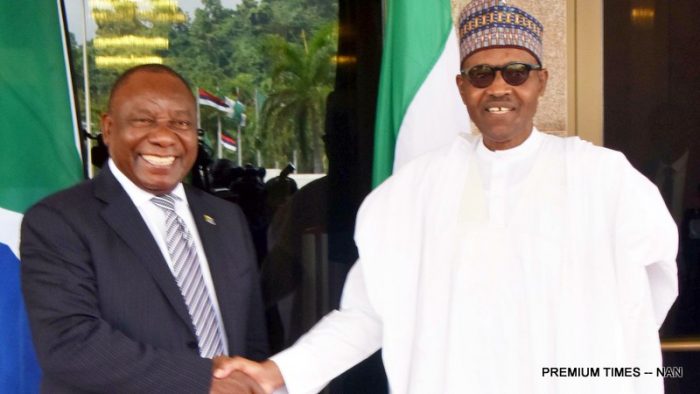 The News Agency of Nigeria (NAN) reports that a review of activities in the country from Nov. 28 to Dec. 4, showed that the MOUs were signed during bilateral meeting between Buhari and Ramaphosa, in the Presidential Villa Abuja, on Dec. 1.

Speaking at the event, the president disclosed that existing MOUs were also reviewed for the progress and prosperity of citizens of both countries.

“Despite the scare generated by the new COVID-19 variant, we have been able to hold successful meetings, while observing strict COVID-19 protocols, through fraternal cooperation and understanding,’’ the Nigerian leader said at a media briefing.

Buhari urged stronger emphasis on people-to-people relations between South Africa and Nigeria to evolve a bond that would be of benefit to both countries and the African continent.

The Nigerian leader reiterated Nigeria’s commitment to improving a “special relationship’’ with South Africa, which would translate into gains for the continent, particularly in education, science, trade and investment, tourism and security.

NAN reports that the week also witnessed the announcement of resumption of passenger operations between Dubai and Nigeria from Dec. 5, offering customers enhanced connectivity to and through Dubai by the Emirate Airline after about 10 months flight suspension.

NAN observed that the lifting of the flight suspension by the airline coincided with President Buhari’s official visit to United Arab Emirates on Dec. 1.

According to the airline, Abuja and Lagos will be served with daily flights from Dec. 5, following the decision of the UAE to remove Nigeria from those countries that their passenger would undergo Rapid PCR test four hours before boarding their flight to Dubai.

In response to this development, Nigeria had equally lifted the ban placed on Emirate airline from flying into Nigeria for abiding by the country’s COVID-19 protocol.

While in Dubai, Buhari attended Nigeria Day and participated in trade and investment forum at Dubai Expo 2020 on Friday and Saturday, respectively.

Speaking at the events, Buhari stressed the need for world leaders to work together and reinforce partnerships to limit the catastrophic consequences of the global surge in cases of COVID-19.

The Nigerian leader also assured captains of industry and entrepreneurs, who had shown interest and commitment to further enhance trade and investment relations with Nigeria.

He said that his administration would continue to work with them to improve the business climate, especially as the African Continental Free Trade Area (AfCFTA) comes into full effect.

According to him, Nigeria remains the most viable and attractive investment destination in Africa, adding that the country is on the path of becoming the continent’s leading industrial and trading nation.

‘‘Our location, our natural resources, our population, and our regulations are there for all to see. Nigeria is on its way to becoming a leading industrial and trading nation in Africa.

‘‘To achieve this, our government focused on policies, projects and programmes that support private sector investors.

‘‘We introduced numerous fiscal incentives and infrastructure projects aimed at enhancing the viability of investments.

‘‘Despite the adverse global economic environment of recent years, Nigeria’s investment environment has greatly improved both at the national and sub-national levels,’’ he said.

The Nigerian leader had earlier on Nov. 30, expressed solidarity with Nigerian women as they observe 16 days of activism against Gender-Based Violence from Nov. 25 to Dec. 10, 2021.

The president expressed the solidarity when he received Minister of Women Affairs, Pauline Tallen, who visited him at the State House, Abuja.

“Women are the bedrock of the society and are largely responsible for stabilising the home front.

“My faith in the capability of Nigerian women remains steadfast as exemplified by the key positions they occupy in the present administration.

“I assure you that I will always be here for you and you can count on my support in your activities,’’ he said.

The minister had briefed the president on various enlightenment activities of her ministry toward the international campaign.

She explained that the 16-day activism is with the theme: “Orange the World: END VIOLENCE AGAINST WOMEN NOW!’’.

President also on Nov. 30, in Abuja honoured two civil servants, Muhammad Ahmad and Nelson Okoronkwo and a Nigerian student in Japan for exhibiting exemplary acts of honesty and integrity.

He recently recovered and declared to the Agency 24,500 dollars offered as bribe by a drug baron.

The money was meant to compromise an investigation of 28kg of cocaine worth billions of naira.

Okorokwo, currently a staff of the Federal Ministry of Information and Culture, was also recognised for his consistent acts of integrity in the different ministries where he previously served.

He was a committee member on fertiliser distribution that led to the recovery of billions of naira from racketeers with collaborators in the Federal Ministry of Agriculture and Rural Development.

He was also credited to have reported corrupt practices that led to the Ogoni clean-up investigation in the Federal Ministry Environment.

As Committee Chairman on Illegal Recruitment in the Federal Ministry of Information and Culture, the Deputy Director facilitated the detection and removal of more than 3,000 fake employers from the Service.

The act saved the government millions of naira in terms of salaries and emoluments.

Ikenna Nweke, a PhD student from Imo studying in Japan, found a wallet containing a large sum of money and other valuables.

He returned them to the Japanese Police where he also declined 10 per cent of the money he found when a reward was offered to him.

On Nweke who joined the event virtually from his base in Japan, Buhari said: ‘‘I am also happy to note the ICPC special award on the PhD student from Imo studying in Japan.

Vice-President Yemi Osinbajo also presided over the meeting of the National Economic Council (NEC) where the council endorsed a memorandum on Finance Bill 2022.

The virtual emergency NEC meeting was anchored from the Presidential Villa, Abuja, on Nov. 30.

The Minister of Finance, Budget, and National Planning, Dr Zainab Ahmed, who presented the bill to the council, told NEC that the proposed bill was intended to be passed alongside 2022 budget.

According to the minister, some of the proposed legislative changes cover domestic revenue mobilisation, closing tax loopholes, public financial management and tax administration reforms as well as international taxation issues.

Osinbajo was also in Bida, Niger State, during the week under review, where he attended the turbaning ceremony of some prominent persons in Bida Emirate, saying “Nigeria needs not just achievers, but men and women who are bridge builders and unifiers.’’

In Bida, the Etsu Nupe and Chairman, Niger State Council of Traditional Rulers, Alhaji Yahaya Abubakar, in a show of goodwill and appreciation, conferred on the vice president the “Garkuwan Yamma Nupe”, which means – the Defender of Nupe Kingdom.

The vice-president also on Nov. 28, attended the graduation ceremony of the Executive Intelligence Management Course (EIMC) 14, 2021 of the National Institute for Security Studies, Abuja.

Osinbajo, who was the Special Guest of Honour, said it had become imperative to reinvent the institutional culture of Nigeria’s security and intelligence agencies.

According to him, Nigeria’s security and intelligence agencies must adopt a culture that is empirical, data-driven, analytical and defined by forensic rigour.

According to the minister, some of the proposed legislative changes cover domestic revenue mobilisation, closing tax loopholes, public financial management and tax administration reforms as well as international taxation issues.