Draws for the quarterfinals of the UEFA Champions League has pitted local Spanish rivals Real Madrid and Atletico, while Spanish league leaders Barcelona will come up again against Paris St. Germain.

The rest of the quaterfinal line-up has 2013 champions Bayern Munich drawn to face 2004 winners FC Porto while Juventus would fancy their chances of reaching the last four after being drawn with Monaco. 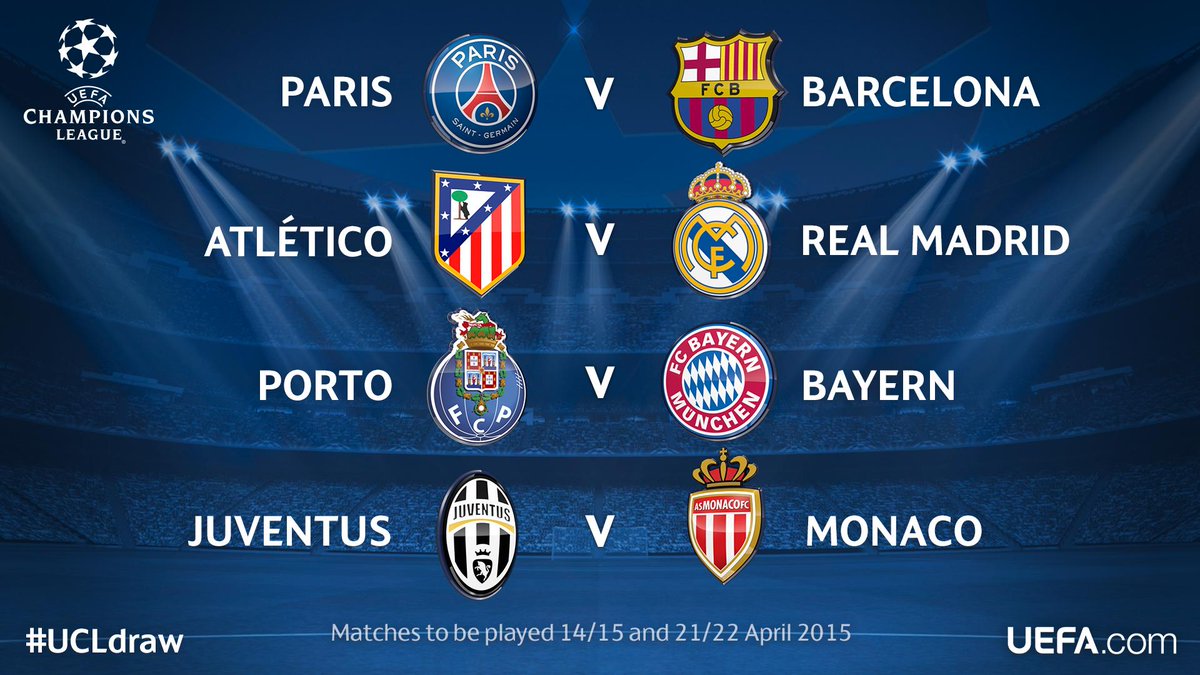 Real Madrid have it all to do against Atletico, having failed to win any of the last six encounters between both sides since coming from behind to dramatically win last season’s Champions League title at the expense of Diego Simeone’s men.

Since then, Atletico have won four of the six derbies, with the most recent ending in an emphatic 4-0 triumph – Atletico’s biggest win over Real in 28 years.

Barcelona meanwhile will come up against a PSG side it faced earlier in the group stage as well as in this stage of the competition two seasons ago; with both clubs winning a game apiece in the first instalment of their meetings this season.

PSG on their part will be looking to end a run of two successive exits at this stage of the competition, doing so against Chelsea last season and Barça the season before; falling out on away goals on both occasions.

The Parisians would have to do without talismatic striker Zlatan Ibrahimovic for the first leg against Barcelona, as the Swede received a one-match ban for the red card in the last 16 second leg clash at Chelsea.

PSG’s Ivorian defender Serge Aurier is also ruled out of both legs of the clash with Barça, following a three-match suspension for comments made towards referee Bjorn Kuipers after the clash at Chelsea.

For Bayern Munich, the German juggernauts come up against the Portuguese team responsible for the sole defeat – in the 1987 final – in 22 previous meetings against clubs from the Iberian nation in Europe’s elite competition.

Porto is also the last team left in the competition that is yet to taste defeat, but the task against a Bayern side – that brushed Shakhtar Donetsk aside with a 7-0 demolition – is uphill.

Finally, Italian champions Juventus meet with French darkhorses Monaco in a repeat of the 1998 semi-finals which Juve won 6-4 on aggregate as the Italians went on to win the competition.

And Juve sporting director Pavel Nêdved reckons “We’ve got a chance to get through to the next round, that’s the most important thing. We’ll give it a good go.”

The quarterfinal first leg matches are scheduled to take place on April 14 and 15, with the return fixtures coming up a week later on April 22 and 23.

April 14
Aletico Madrid vs. Real Madrid
Juventus vs. AS Monaco

April 22
Real Madrid vs. Atletico Madrid
AS Monaco vs. Juventus