Miroslav Klose scored two minutes after coming on to equal the all-time World Cup scoring record and salvage a thrilling 2-2 draw for Germany against Ghana in a Group G match in Fortaleza. 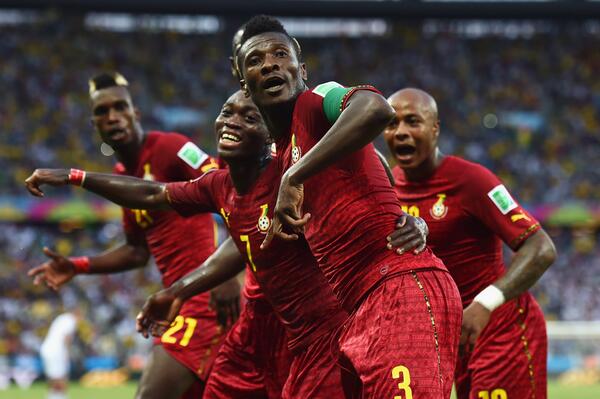 Ghana had conceded the fastest goal at this year World Cup so far in their opening match against the United States, but there would be no repeat against the more illustrious Germans.

On the contrary, Ghana came close to breaking the deadlock twice in the first half only for fierce shots from Christian Atsu and Sulley Muntari to be kept out by Germany goalkeeper Manuel Neuer.

The match burst to life in the second half and the Germans finally broke the deadlock five minutes after and in unortohodox fashion, as a Thomas Müller cross saw the ball bounce off Mario Götze’s knee then ricochet off his face into the Ghana goal.

Ghana were back on level terms just three minutes later however through Andre Ayew who headed in a cross by Harrison Afful.

Asamoah Gyan then put Ghana ahead with a low strike past Neuer past the hour mark after being put through on goal by a good Muntari pass through the middle.

Substitute Jordan Ayew then squandered a great chance to extend Ghana’s lead, forcing a save from Neuer from a tight angle instead of squaring to the visibly displeasured Gyan.

Klose and Schweinsteiger then came on for Germany and the former got the faintest of touches from a goalbound Howedes header to score Germany’s equaliser and equal the all-time record for most World Cup goals held by Ronaldo of Brazil.

Both sides eventually settled for the 2-2 draw, which leaves Germany top of the group with four points while Ghana is third with one point after two matches.

The result gives the United States an opportunity to seal passage to the last 16 with a win over Portugal on Sunday, while a win for Portugal in that match would leave all four nations with a chance of progressing.