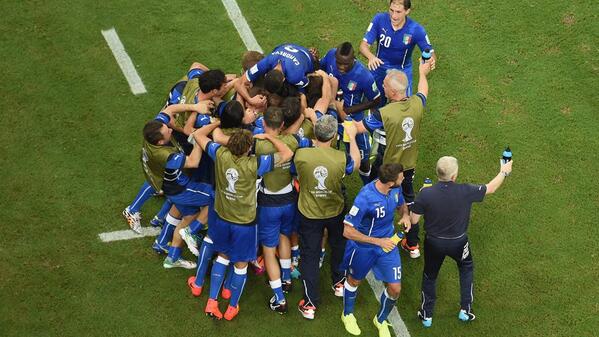 A second half header from Mario Balotelli secured a hard-earned 2-1 win in Manaus over a valiant England side in a pulsating Group D match of the FIFA World Cup.

The match began on a high tempo with Liverpool forward Raheem Sterling sending a shot into the sidenetting, though it took a few seconds for spectators to realise he had not scored.

The Italians meanwhile slowly grew into the game, with Andrea Pirlo running the midfield and Antonio Candreva giving Leighton Baines much work down the right flank.

And it would be the Azzurri to break the deadlock on 35 minutes from a cornerkick, with Claudio Marchisio rifling a half volley past Joe Hart off a brilliant dummy by Pirlo.

England hit back immediately however, with Sterling regaining possession and finding Wayne Rooney whose cross was converted by Daniel Sturridge to level the scores.

A side-scene emerged after Sturridge’s goal, as England physio Gary Lewin was stretchered off after injuring his ankle while celebrating the goal on the touchline.

AC Milan striker Balotelli then came close to restoring Italy’s lead just before half time but his audacious chip from an acute was headed off the line by Phil Jagielka with Hart well beaten.

Balotelli would however get his goal and what turned out to be the match winner five minutes into the second half, heading in a pinpoint cross from the impressive Candreva.

England came close to equalising again but Rooney saw his shot sail just wide of the post after the hour mark while Baines saw a well struck free-kick parried away by Salvatore Sirigu, in goal for Gianluigi Buffon.

Pirlo then came close to extending Italy’s lead but his free-kick came off the woodwork having sent Hart the wrong way. Italy would settle for the 2-1 win in what was an thrilling encounter.

As a result, Italy is now second in Group D behind Costa Rica who earlier tonight came from a goal down to claim a shock 3-1 win over 2010 World Cup semi-finalists Uruguay.