Two goals from Neymar saw Brazil come from a goal down to defeat Croatia 3-1 in the opening match of the 2014 FIFA World Cup which kicked off tonight in Sao Paolo.

Following a colourful opening ceremony which involved a performance of the official theme song by songsters J-lo, Pitbull and Claudia Leitte, the match began in a manner unexpected.

Hull City striker Nikica Jelavic had scuffed a shot under pressure from Brazil captain Thiago Silva, with the ball bouncing off Marcelo’s shin on its way past goalkeeper Julio Cesar to give Croatia an 11th minute lead.

Marcelo’s own goal was the first Brazil had ever scored against itself in World Cup history.

Drama would follow midway through the first half as Oscar won possession from Ivan Rakitic and fed Neymar who shot Brazil back into the match and sparked a period of protests from Croatia. 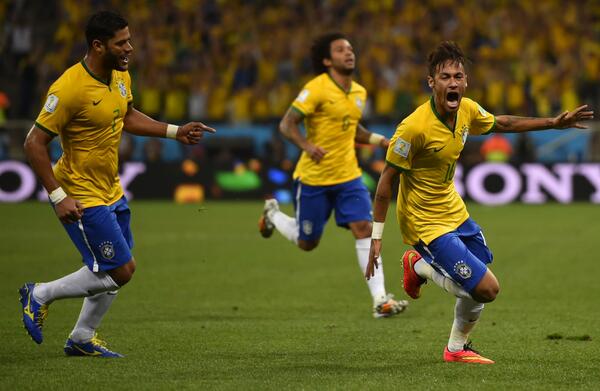 The Europeans felt Neymar, who got a yellow card instead, should have been sent off for an elbow which caught midfielder Luka Modric two minutes before the equaliser.

When the match eventually resumed, Brazil began to assert themselves in the game but had to be satisfied going into the half time break level.

Making his 50th appearance for Brazil, Neymar scored a second goal for the hosts 20 minutes from time via a penalty after striker Fred was adjudged to have been fouled.

Olic thought he had equalised but his effort was ruled out for a foul on the Brazil goalkeeper in the build-up. Chelsea midfielder Oscar would then sealed the win for Brazil with a stoppage time effort.

The win maintains a record which has seen host nations never tastes defeat in the opening match of a World Cup, with Neymar scoring his 23rd and 24th international goals for Brazil.

The 2014 World Cup continues on June 13 with former African champions Cameroun opening their campaign against Mexico from 5pm (Nigerian time), followed by defending champions Spain coming up against the Netherlands in a repeat of the 2010 World Cup final.