Arsenal played just over half an hour with 10 men but still went on to claim a dramatic 2-1 win over Queens Park Rangers in the final match of the Premier League’s Boxing Day schedule.

QPR went into the match hoping to avoid an unenviable record of losing a ninth successive league match on the road while Arsenal hoped to recover from letting slip a win in the draw at Liverpool on Sunday. 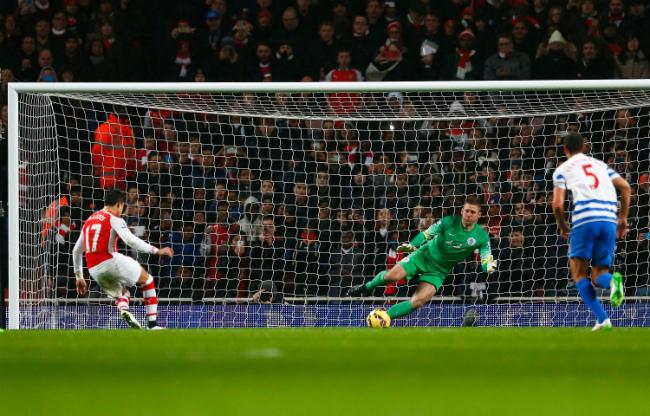 It was the Gunners that started well at the Emirates, with referee Martin Atkinson finally awarding a ninth minute penalty for a foul on Alexis Sanchez by former Arsenal defender Armand Traore, after apparent handballs by both sides are waved aside by Atkinson seconds before.

Alexis however saw his tame effort from the spot kept out by QPR goalkeeper Robert Green, the first penalty an Arsenal player would fail to score in the league in just over two years.

Arsenal continued to attack and had a shout for another penalty waved aside by Atkinson while Olivier Giroud saw a well struck freekick kept out by Green midway through the first half.

Eventually Arsenal’s dominance was rewarded with a goal as Alexis atoned for his earlier penalty miss to put the Gunners ahead after 37 minutes, getting ahead of Traore to head in a Kieran Gibbs cross.

Optimism dimmed for Arsenal minutes into the second half though, as Giroud received a straight red card for confronting Nedum Onuoha moments after an attempted clearance by Green ricocheted off the Frenchman and just wide of the QPR goal.

Going a man down seemed to fuel Arsenal’s intent however, with Alexis curling an effort just wide on the hour mark before turning provider for Tomas Rosicky who drilled in a first-time shot to put Arsenal 2-0 up after 65 minutes with his first goal in 18 months. 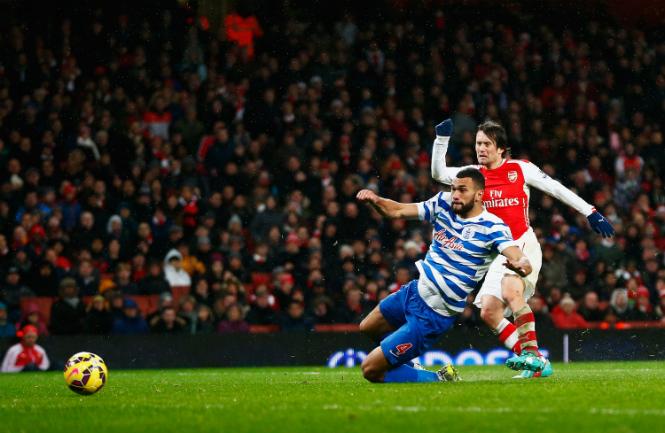 Danny Welbeck then had a weak effort saved by Green before Charlie Austin, with his 12th of the season, pulled one back for QPR from the penalty spot after Matthieu Debuchy brought Junior Hoilett down 12 minutes from time.

The goal set up a tense finish at the Emirates but Arsenal held on to claim the win and return to sixth place on the table with 30 points, ahead of north London arch-rivals Tottenham on goal difference and a point behind their next opponent on Sunday, West Ham.