Championship club AFC Bournemouth qualified for the quarterfinals of the English League Cup for the first time ever following a dramatic 2-1 win over Premier League club West Brom on Tuesday.

Tommy Elphick’s 85th minute own-goal had cancelled out Eunan O’Kane’s early second half opener for Bournemouth but Callum Wilson restored the Championship side’s lead a minute after to seal a first ever appearance in the last eight. 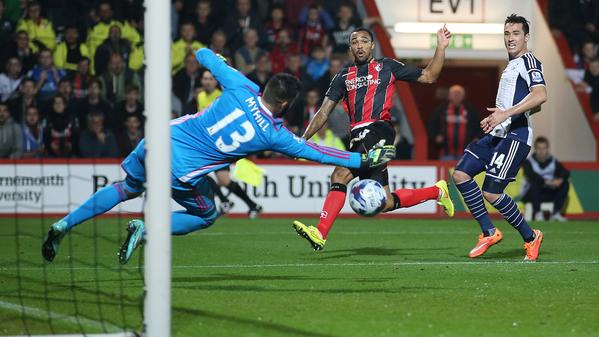 Blanco went close for West Brom early in the second half but Bournemouth took the lead seconds after his miss, as O’Kane slotted home after being set up by a Junior Stanislas through-ball.

West Brom had a number of penalty appeals turned down as the Premier League club searched desperately for an equaliser, which eventually came five minutes from time when Elphick turned a Giorgios Samaras ball into his goal.

But the possibility of a West Brom comeback was dashed a minute later as Wilson burst down the right straight from kick-off and beat a defender before shooting past Myhill to send Bournemouth into the last eight.

Also through to the last eight is Premier League leaders Chelsea which needed a Jermaine Grandison own-goal nine minutes from time to get a 2-1 win at League Two outfit Shrewsbury Town.

Following a drab first half, Andre Schürrle and Mohamed Salah combined to set up Didier Drogba who put Chelsea in front three minutes into the second half with his third goal in as many matches.

A fingertip save denied Schürrle two minutes later with a long range effort while Drogba was also denied by the Shrewsbury goalkeeper just before the hour mark.

For all of Chelsea’s dominance, Shrewsbury found a way back into the game when Andrew Mangan smashed in a 76th minute equaliser with his first touch after coming on for James Collins.

Parity for Shrewsbury however lasted only five minutes as Grandison turned in a cross from substitute Willian to send Chelsea through.

In other matches, Manchester United’s conquerors in the competition, Milton Keynes Dons fell 2-1 at home to Sheffield United while Derby County came from two-goals down to claim a stunning 5-2 win at Fulham.