Argentina Edge Past Netherlands via Penalties

Argentina Edge Past Netherlands via Penalties

Argentina have qualified for the FIFA World Cup final courtesy of goalkeeper Sergio Romero who saved two spotkicks in a 4-2 win via penalties over Netherlands following a goalless 120 minutes in Sao Paulo. 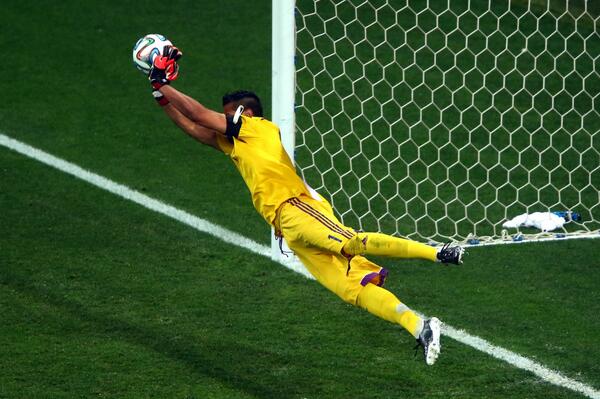 The second semi-final was a cagey affair with very few chances to score at both ends as the match wound down to penalties where Ron Vlaar and Wesley Sneijder failed to score their spotkicks for Netherlands.

Robin van Persie recovered from a stomach upset to start for the Netherlands, as did midfielder Nigel de Jong who had been a doubt with a groin injury. Marcos Rojo meanwhile returned to the Argentina starting line-up while Sergio Agüero only made the bench having recovered from an ankle injury.

And following Germany’s 7-1 demolition of Brazil on Tuesday night in the first semi-final, Argentina and Netherlands began the second semi-final in cautious mode as neither created clear cut chances.

Lionel Messi got Argentina’s first shot on target with a low freekick round the Dutch wall which was comfortably saved by Jasper Cilllessen in the 15th minute.

Defender Ezequiel Garay was next to threaten just past the half hour mark but was unable to steer his header off a cornerkick from Ezequiel Lavezzi goalwards having beaten Ron Vlaar to the ball.

Vlaar went on to have a good game alongside the other Dutch centre-backs as Messi and the Argentines were kept at bay for the rest of the first half and indeed the entire match.

The Aston Villa man made last ditch tackles in the second half to block shots from Messi, Gonzalo Higuaìn and substitute Sergio Agüero while Higuaìn squandered a glorious chance in the 75th minute when he poked to the sidenetting from close range.

Bayern Munich attacker Arjen Robben however could have won it in stoppage time for Netherlands when a Sneijder backheel put him through on goal only for Javier Mascherano’s blocking tackle to send the match into extra-time.

Robben finally got Netherlands’ first shot on target during the first period of extra-time but his effort went straight at Romero who saved comfortably in the 99th minute.

The second period of extra-time saw substitute Rodrigo Palacio then had a tame header saved by Cillessen, who also saved comfortably from a Maxi Rodriguez shot and see the match go to penalty shootout.

There would be no substituting Cillessen for Tim Krul this time around for the Netherlands as coach Louis van Gaal had used up his three substitutions by the start of extra-time.

Instead, it was his other main players who let him down in the shootout as Romero saved the first spotkick from Vlaar and – following successful kicks from Messi, Robben and Garay – the third kick from Sneijder to hand Argentina the initiative.

Dirk Kuyt kept Netherlands in it at 3-2 after Agüero had scored his penalty but Rodriguez sent Argentina through to the final with the fourth kick.

Argentina’s win sets up a final match against Germany at the Maracana on Sunday in a repeat of the 1990 and 1986 World Cup finals, a new World Cup record.

Netherlands meanwhile will face host nation Brazil in the third place playoff on Saturday in Brasilia.