An early strike by Gonzalo Higuaín was enough to see Argentina through to the World Cup semi-final at the expense of an uninspired Belgium side.

A cagey opening to the match made way for a moment of brilliance from Higuaín, who scored after meeting an Angel di Maria pass deflected to his path with a first-time volley. 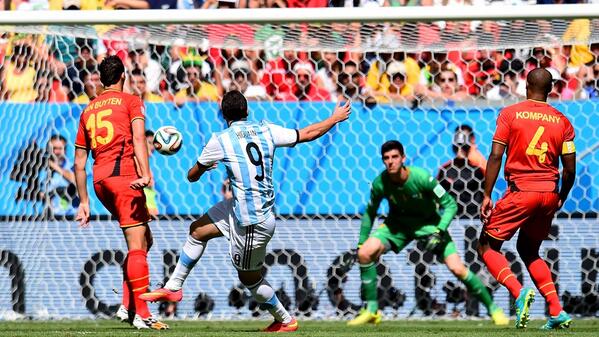 It was the Napoli striker’s first World Cup goal and the relief of breaking his duck at the mundial was evident in his celebration.

The rest of the half however reclused to its cagey nature, with Kevin de Bruyne seeing a long range effort parried away by Sergio Romero in the Argentine goal midway through the first half.

Winger Di Maria was then forced off with an injury soon after as the opening half petered out with Higuaín’s goal the difference at half-time.

The striker came close to doubling Argentina’s lead 10 minutes into the second half, going past Belgium captain Vincent Kompany before crashing an effort of the crossbar.

Belgium coach Marc Wilmots made to inject some life into his team on the hour mark, bringing on Dries Mertens and Romelu Lukaku for an evidently disappointed Kevin Mirallas and anonymous Divock Origi.

For a brief spell right after, Belgium laid siege on the Argentina area with Marouane Fellaini heading just over while Romero was alert to save Argentina defender Ezequiel Garay from scoring an own goal second later.

Despite edging possession for the remainder of the encounter, Belgium were unable to find a way through while Messi found himself one-on-one with Thibaut Courtois but was denied by the Belgian goalkeeper.

Argentina would hold on for a semi-final berth and await the winner of the last quarterfinal match between 2010 finalists Netherlands and giantkilling Costa Rica later tonight.