Netherlands Finish off Chile to Top Group B

Netherlands Finish off Chile to Top Group B

Second half goals from substitutes Leroy Fer and Memphis Depay gave Netherlands a hard-fought 2-0 win over Chile, which ensured the Dutch finish top of Group B ahead of Chile. 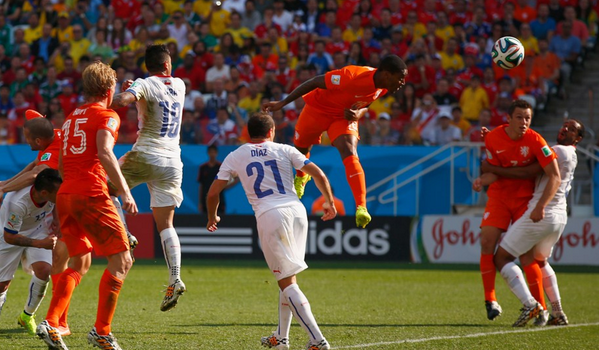 Spain ended their calamitous title defence on a weak high with a consolatory 3-0 win over Australia in the other Group B match played simultaneously this evening.

A close first half in Sao Paulo saw both sides fail to create clear-cut chances, with a shot from Arjen Robben going wide and the Chileans having a couple of penalty shouts waved away by the referee the highlights of a goalless half.

Robben forced a good save from Chile’s Carlos Bravo in the second half and Stefan de Vris headed wide from a freekick while Chile’s best chance after the break was from a near post shot by Alexis Sanchez which was punched clear by Jasper Cillessen.

Netherlands eventually took the lead in the 77th minute through a powerful header from Fer, 90 seconds after coming on for Wesley Sneijder.

And despite Chile dominating the closing stages in search of an equaliser, Depay sealed the 2-0 win for the Dutch in stoppage time at the end of a swift counterattack that saw Robben square the ball for him to tap home.

The win gives Netherlands three wins from three matches while Chil finish second in the group with six points. Goals from David Villa, Fernando Torres and substitute Juan Mata saw Spain end their campaign third with three points while Australia finished bottom of the group with no points.

Villa scored Spain’s first goal from open play in Brazil with a clever flick past Mathew Ryan after the half-hour mark in his last appearance before retiring from international football. 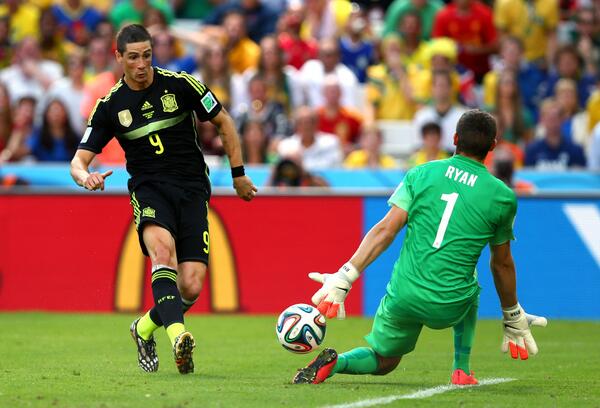 Torres doubled Spain’s lead with 20 minutes to go, running onto a precise Iniesta pass to score his first World Cup goal since 2006 before Mata wrapped up a comfortable win eight minutes from time.

Netherlands will next face the runner-up of Group A while Chile face the Group A winner, which would be decided tonight in the matches between Brazil and already eliminated Cameroun and third placed Croatia who need a win over second placed Mexico to qualify.