Chile would count themselves fortunate after coming away with a scarcely deserved 3-1 win over Australia in a Group B match of the 2014 World Cup played in Cuiaba.

Following the humbling of world champions Spain by the Netherlands in Salvador, both nations knew a win would be crucial to boosting any hopes of progressing to the second round.

And it was Chile that opened the scoring after 12 minutes through Alexis Sanchez, with the Barcelona forward setting up Jorge Valdivia for Chile’s second two minutes later as the South Americans threatened to run go on a goal spree.

That however would not materialise as the Australians crept back into the match and got an equaliser 10 minutes to half-time through a Tim Cahill header. 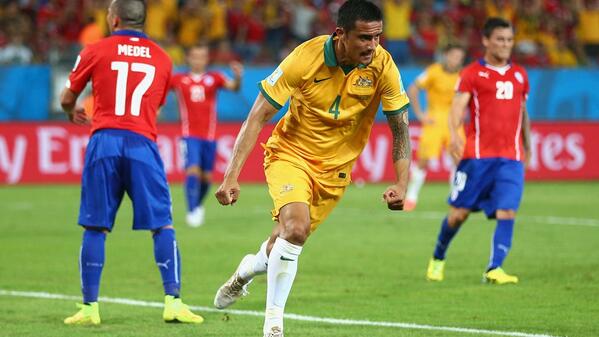 The Socceroos continued to create the better chances and had a goal disallowed early in the second half as the offside flag denied Cahill a second goal.

But with time running out, it would be Chile to score another goal as substitute Jean Beausejour slotted home a rebound in stoppage time after Mauricio Pinilla’s initial effort was kept out by Mathew Ryan in the Australia goal.

Chile, in second place behind the Netherlands on goal difference, next face Spain on June 18 while Australia must avoid defeat same day against the rampant Dutch to keep alive their chances of progressing.