Bayern Munich completed a domestic double today courtesy of a 2-0 win after extra-time over archrivals Borussia Dortmund in the final of the German Cup in Berlin. 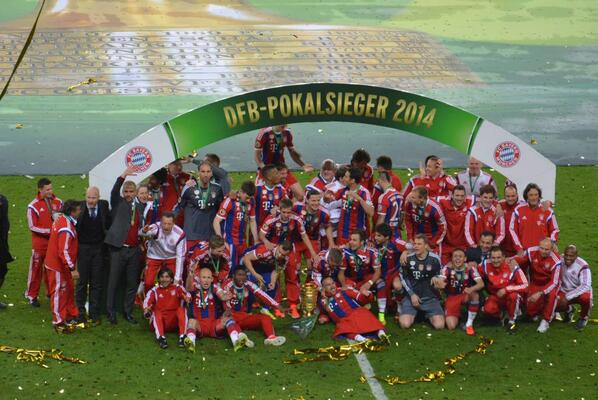 An eventful match was settled in Bayern’s favour with goals in each half of extra-time from Arjen Robben and Thomas Müller, as scoreline after normal 90 minutes was goalless.

The outcome could have been different though, as a Mats Hummels header appeared to cross the Bayern goal line before being cleared by Brazilian defender Dante and the referee ignored appeals from Dortmund players for the effort to be awarded.

On Bayern’s part, captain Philipp Lahm went off injured in the first half – with national team coach Joachim Löw watching from the stands – to throw his participation at the 2014 World Cup with Germany in doubt.

The match was also Robert Lewandowski’s last match for Dortmund before coincidentally finalising his transfer to Bayern in June.

The pyrrhic win for Bayern means the Bavarian outfit end the season with the league and cup double, as well as the Club World Cup title won in December last year.