Inter Milan edged closer to sealing a place in next season’s Europa League after beating Lazio in a Serie A match, while Paris St. Germain beat Vincent Enyeama’s Lille to ensure they will finish the Ligue 1 season with record points haul.

Inter Milan came from behind to claim a 4-1 win over Lazio, a result that took Inter to 60 points in fifth place while Lazio’s hopes of qualifying for the Europa League were dashed with the loss.

Rodrigo Palacio scored two goals either side of Mauro Icardi’s goal to put Inter 3-1 up, before Hernanes – who joined from Lazio in January – sealed a comprehensive win for Inter and ensured Javier Zanetti’s final match at the San Siro ended with a win.

Inter could well seal a place in next season’s Europa League if Torino and Parma draw when both meet in Turin on Sunday. Inter’s city rivals AC Milan on their part saw their Europa League hopes dim in a 2-1 loss at Atalanta on Sunday.

Other matches to be played in Serie A on Sunday will see champions Juventus visit second placed AS Roma, third placed Napoli away at Sampdoria and bottom side Livorno hosting fourth placed Fiorentina in a match that could see Livorno get relegated even with a win.

Meanwhile in France, champions Paris St. Germain eased to a 3-1 win at third placed Lille to break Olympique Lyon’s eight-year record for most points won in a Ligue 1 season.

Lyon had finished the 2005/06 with 84 points but PSG now have 86 points from 37 matches, with the Parisians on course to finish the season with a record 89 points should they win at home to Montpellier next weekend. 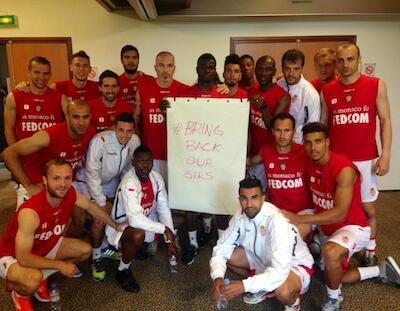 Elderson Echejile’s Monaco, who showed their support for the #BringBackOurGirls campaign, won 2-1 at relegated Valenciennes while St. Etienne went within two points of Lille in the race for the last Champions League spot thanks to a 3-1 win at FC Nantes.

Other results saw fifth placed Lyon remain in the last Europa League spot despite a lone goal loss at home to Lorient while Olympique Marseille could only draw 1-1 draw at seventh placed Bordeaux to come within a point of Lyon with a game to go.