Vice President Kamala Harris became the makes history as the first woman to hold presidential power in U.S. history on Friday following the decision of President Joe Biden to transfer power to her.

Biden had on Friday wrote the United States Senate to convey his decision to temporarily transfer the powers and duties of his office to Harris as he undergoes a routine surgery which will require sedation.

In the letter addressed to Honourable Patrick Leahy, President Pro Tempore of the United States Senate, Biden said the transfer of power to Harris was in accordance with section 3 of the 25th Amendment to the United States Constitution.

He added that the letter is a written declaration that he is presently unable to discharge the powers and duties of the of the office of the President of the United States.

Harris the first female US Vice President has thus also become the first woman and to hold presidential power in U.S. history.

The White House had earlier revealed that Biden will transfer power briefly to Harris on Friday while he is under anesthesia for a routine colonoscopy.

Reuters reports that Biden is undergoing his annual physical at the Walter Reed military hospital outside of Washington.

“Following the process set out in the Constitution, President Biden will transfer power to the Vice President for the brief period of time when he is under anesthesia,” White House spokesperson Jen Psaki said in a statement.

“The Vice President will work from her office in the West Wing during this time,” Psaki said.

Presidential power has been transferred to the vice president before, when President George W. Bush had colonoscopies in 2002 and 2007.

Biden, who turns 79 on Saturday, is the oldest person to take office as U.S. president, leading to high interest in his health and well-being.

But he has promised to be more transparent about his health than predecessor Donald Trump.

The Republican visited Walter Reed in 2019 for an undisclosed reason that a former press secretary, Stephanie Grisham, later revealed was for a colonoscopy.

With reports from Reuters 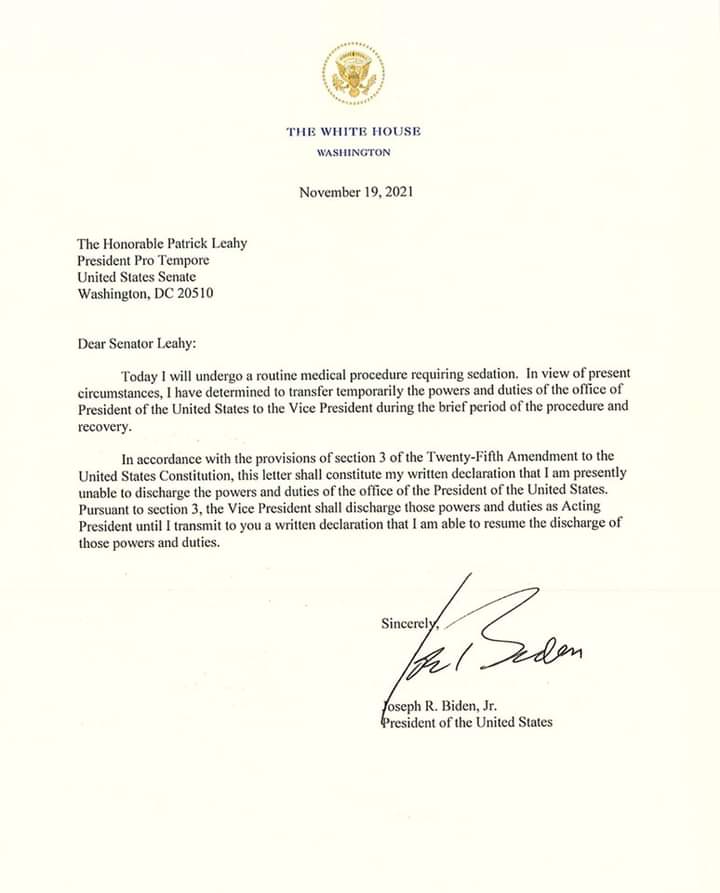