The protesters with their banner at the EFCC office

Hundreds of distressed depositors of the  crashed MBA Forex Trading and Capital investments in Port Harcourt on Wednesday stormed Port Harcourt zonal office of the Economic and Financial Crimes Commission, EFCC to seek the help of the anti-graft agency to recover their funds.

The company, which was later grouped as a one of the notorious Ponzi schemes by the Central Bank of Bank,CBN, crashed in November 2020.

The crash of the company led to trap of billions of naira deposited by its customers.

But the proprietor and founder of the company, Maxwell Odum and the staff ran away.

An investor who gave his name Broderick Ikenna, Cement dealer in Port Harcourt told our Correspondent he invested N20 million of his business capital borrowed from my bank into MBA Forex Trading with the promise the he will get bank my 50 percent profit in less than six months. “Not long after I invested, we started hearing that the company has some “issues which would be sorted soon. Since then,it is been one promise after another,” he said.

The protesters were carried different banners with write up like, “A fraudster is not different from a Terrorist, MBA TCI Limited is killing depositors ( Nigerians) slowly with depression”. 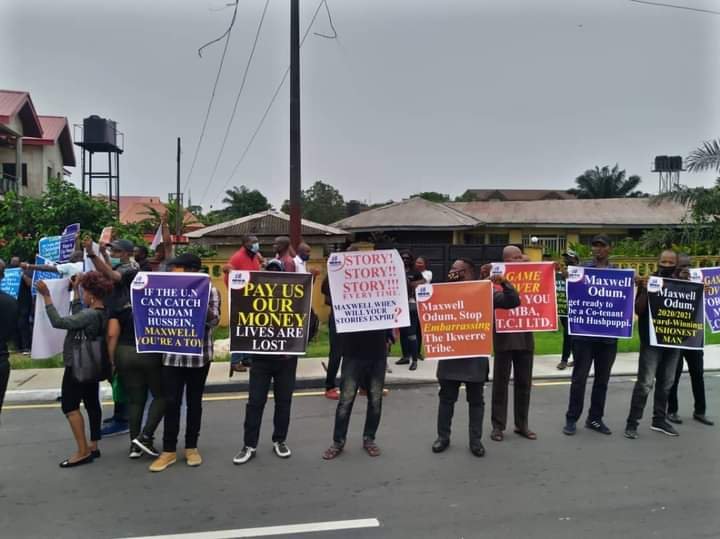 A cross section of protesting depositors of of millions of Naira at the crashed MBA Forex Trading Company.