Premier League leaders Chelsea produced a dominant display in the early kick-off against West Ham United to win 2-0 on Boxing Day and maintain top spot in the league.

John Terry with his second in as many matches and Diego Costa with his 13th in the league gave the Blues a convincing win over the visiting Hammers to open a six-point gap over Manchester City ahead of the champions’ trip to face West Brom this afternoon. 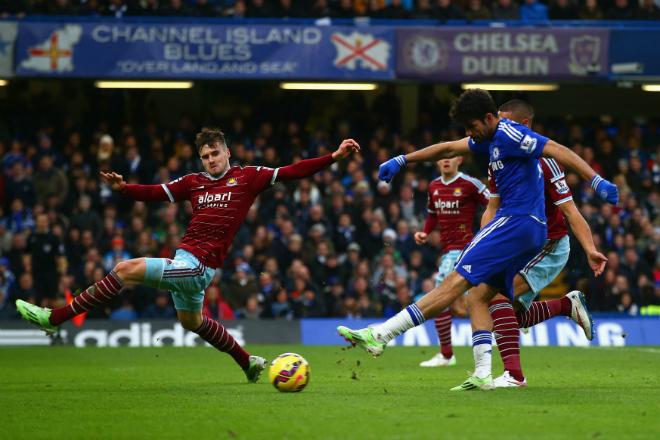 Oscar had the first chance to score early on, but blazed over from close range when scoring seemed a certainty. Cahill then had a fierce shot kept out by the West Ham goalkeeper Adrian as Chelsea searched for the opening goal.

That came just past the half-hour mark from a cornerkick, with Costa flicking a header towards the back post where Terry was on hand to smash the league leaders ahead.

Chelsea came close to extending their advantage minutes later but imposing midfielder Nemanja Matic saw his goal-bound effort kept out by Adrian, who had a busy afternoon at Stamford Bridge.

The West Ham keeper was on hand again to deny Costa, while the Spanish striker shot just over at the end of a sleek passing move from Chelsea that went into the break leading by just a goal.

West Ham began the second half with some urgency though, winning a couple of cornerkicks in the opening minutes which however came to nothing.

Eden Hazard meanwhile got Chelsea’s first chance of the half at the other end, again linking up well with Costa before forcing another save out of Adrian.

Adrian would however be beaten again just after the hour mark, with Ivanovic regaining possession for Chelsea and Hazard sending a pass to Costa who lost two defenders with a turn before shooting across to score.

Costa shot over minutes later, Oscar saw a freekick tipped over and Fabregas shot just wide while West Ham’s Morgan Amalfitano was denied by the post late on as Chelsea saw off another win to maintain its 100% league record at home this season.