Newcastle United made it five successive matches without defeat following a surprising 2-0 win over Manchester City in a League Cup fourth round encounter at the Etihad Stadium on Wednesday.

The result all but vanquished the pressure on Newcastle manager Alan Pardew who has now guided the Magpies to three successive wins in all competitions, having started the season without a win in six matches.

His Man. City counterpart Manuel Pellegrini on the contrary has now seen his team go without a win in three matches, leading him to admit that the Premier League champions are ”not in not in a good moment.” 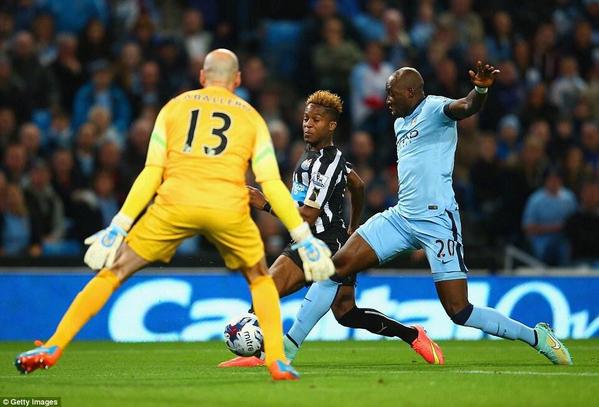 Youngster Rolando Aarons scored only his second career goal to put Newcastle in front after just seven minutes, before substitute Moussa Sissokho sealed a quarterfinal place for the Magpies 15 minutes from time.

City had dominated the encounter and but lacked a cutting edge in front of goal, with their best opportunities being a saved Stevan Jovetic effort and an intended clearance by Newcastle captain Fabio Colocini that hit the post.

It is the furthest Newcastle have gone in a Cup competition under Pardew, with the Tyneside club drawn to visit Tottenham Hotspur in what would be the only all-Premier League tie in the League Cup quarterfinal.

Tottenham made it to the last eight with a 2-0 win over Brighton & Hove Albion while Graziano Pellé scored two minutes from time to give Southampton a 3-2 win at Stoke City in another fourth round match on Wednesday.

The matches will be played in mid-December.