Marouane Fellaini and Daley Blind scored their first Premier League goals for Manchester United to help the Red Devils secure a point in the 2-2 draw at West Bromwich-Albion on Monday night.

The Baggies looked set for an upset against Louis van Gaal’s side which has had an inconsistent start to the season, until Blind got on to a loose ball to score for the visitors with three minutes to go. The result sees Manchester United on 12 points in sixth place, 10 points behind league leaders Chelsea, while West Brom lost a chance to go into the top 10 and end the night in 14th place with nine points.

West Brom started the match well and deservedly took the lead after nine minutes when Stephane Sességnon sent a first-time shot sailing into the top corner off Andre Wisdom’s pass.

Man. United were denied an immediate response when Robin van Persie’s effort was kept out by Boaz Myhill a minute later, with West Brom’s goalkeeper denying Angel di Maria twice in the course of the half as West Brom went into the break a goal up.

The home side’s lead however last just three minutes of the second half as a Di Maria ball eventually fell to half-time substitute Marouane Fellaini who held off Joleon Lescott before beating Myhill with a half-volley.

The goal is the Belgian midfielder’s first in the league since March last year and sparked a spell of heavy United pressure which saw Di Maria denied again by Myhill four minutes after Fellaini’s equaliser.

But against the run of play, West Brom took the lead again when Saido Berahino beat the offside trap and raced on to Chris Brunt’s through-ball before curling past David De Gea for his sixth league goal midway through the second half. 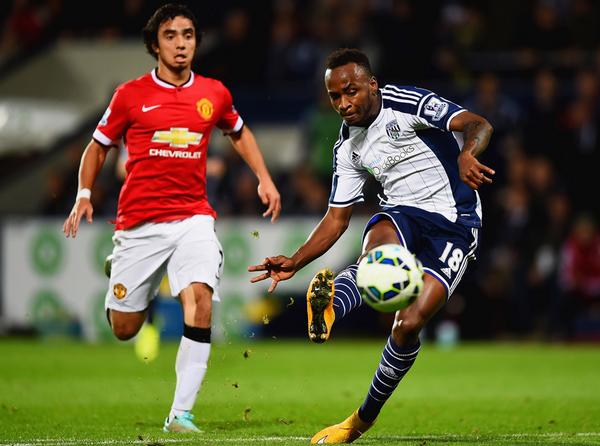 Van Persie’s low first-time shot came off the post in the 74th minute, with Adnan Januzaj blazing the rebound well over as the Red Devils searched for another equaliser.

That came with three minutes to go when Rafael’s cross was headed out towards Blind who slotted home United’s equaliser from 20 yards out and earned the visitors the point in a match they dominated but got undone by poor defending.