Barcelona maintained its unbeaten start to the La Liga season with a relatively easy 3-0 win over Eibar on Saturday while Cristiano Ronaldo scored twice to help in-form Real Madrid to a 5-0 win at Levante in another La Liga match.

The league leaders went into the match having seen its lead cut to just a point by arch-rivals Real earlier on, and for long periods it looked like Eibar would succeed in frustrating them at Camp Nou. 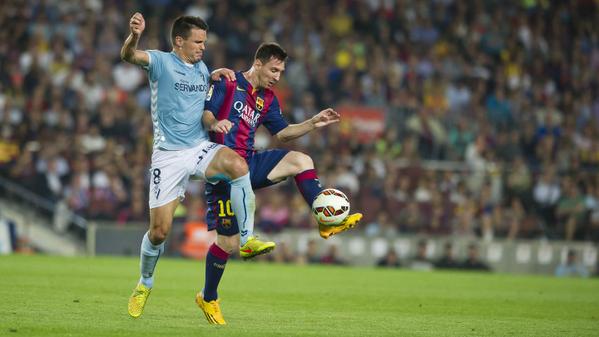 A quiet opening to the match made way for Lionel Messi to squander two opportunities to break the deadlock for Barça midway through the first half.

First, a one-two with Dani Alves put Messi through on goal only for him to be denied by the Eibar goalkeeper, a chance which was followed by the Argentine ace latching on to a loose ball but failing to hit the back of the net as his ensuing shot grazed the woodwork on its way out.

The first half ended on a high as both teams missed glorious chances, with Eibar’s Ander Capa rounding Barça keeper Claudio Bravo only to see his effort in the 40th minute rest in the sidenetting.

Messi then had a header saved by the Eibar keeper in the 44th minute while at the other end, Saul Berjon found himself through on goal but Bravo was on hand to keep scores goalless going into the break.

Barcelona continued to boss play and got due reward on the hour mark when an exchange of passes between Messi and Xavi got the latter through on goal to finally break the deadlock.

Neymar doubled Barcelona’s lead with a volleyed effort off a Dani Alves ball in after 72 minutes for his eighth of the season while Messi sealed the win three minutes later, combining with Neymar before finishing off the post for his 250th La Liga goal.

Messi is now just one goal away from equalling the all-time record for most goals scored by a player in La Liga, held by Telmo Zarra with 251 goals.

The match also marked an eighth successive cleansheet for Barça goalkeeper Bravo, extending his all-time record to 720 minutes as a result.

The result meanwhile puts Barcelona on 22 points after eight matches, four points ahead of Real Madrid ahead of next weekend El-Clasico at the Bernabeu.

Real on its part eased to a 5-0 win at Levante, with Ronaldo taking his league tally to an incredible 15 goals after eight matches.

The Ballon d’Or holder threatened twice in the opening five minutes and a further five minutes later, he got his goal from the penalty spot after Javier Hernandez had been fouled in the area by Juanfran.

Levante’s Hector Rodas had a 25th minute effort cleared off the line by Luka Modric, who himself was denied by the Levante goalkeeper 10 minutes later.

Real however doubled its lead three minutes later through Hernandez off a James Rodriguez cross, while a solo effort from Ronaldo just after the hour mark effectively ended the tie as a contest.

Further goals from Rodriguez and Isco sealed a fifth successive league win for Carlo Ancelotti’s free-scoring side, which has now scored 25 goals in that sequence.

Elsewhere in La Liga on Saturday, Athletic Bilbao’s struggles continued in a 1-1 draw at home to Celta Vigo as Aritz Aduriz’s sixth minute goal for Bilbao was cancelled out by Nolito in the 73rd minute.