CSKA Moscow forward Ahmed Musa sat out training earlier today at the Super Eagles camp in Abuja ahead of the return leg of the 2015 African Nations Cup qualifier against Sudan on Wednesday.

Musa, along with midfielder Michael Babatunde, failed to take part in training with the rest of the squad due to a sore ankle picked up during the shock 1-0 loss to Sudan last Saturday in Khartoum. 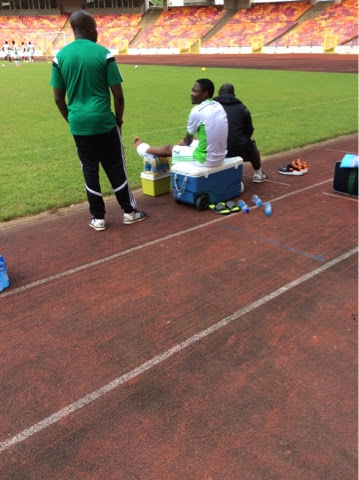 National team officials however assured that Musa would be fit in time for Wednesday match in Abuja, stating that the 21-year old forward sitting out training today was a precautionary measure.

Nigeria lie bottom of Group A in AFCON 2015 Qualification with just a point after three matches, behind group leaders South Africa with seven points, Congo with six points and Sudan with three points.

As a result, the Stephen Keshi-led side must win the return leg against Sudan to keep alive the now thread-bare hopes of reaching AFCON 2015 and defending the title won in South Africa in February last year.