Vincent Enyeama of Nigeria and USA’s Tim Howard missed out on the nominees list for the 2014 FIFA World Cup Golden Glove award, with Keylor Navas of Costa Rica among the three goalkeepers nominated. 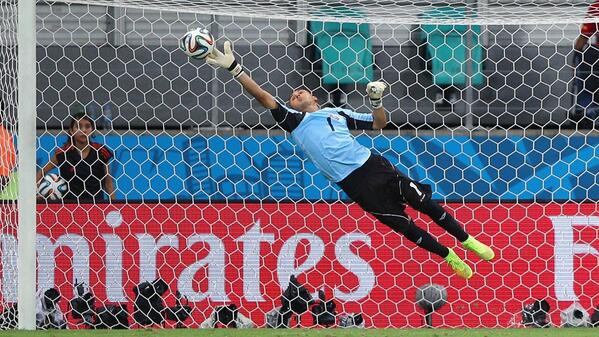 Nominated alongside Navas, who was key in Costa Rica’s surprise run to the quarter-finals, are Germany’s Manuel Neuer and Sergio Romero of Argentina; both of whom will feature in Sunday’s World Cup final.

Romero on his part has kept four cleansheets and made just 15 saves from six matches so far to help Argentina reach the final.

USA’s Tim Howard made 27 saves from only four matches, including a World Cup record 17 saves in the 1-0 defeat to Belgium in the second round.

Nigeria’s goalkeeper Enyeama meanwhile made 22 saves and kept two cleansheets from four matches as the Super Eagles made it to the second round before losing out to France.

Mexico goalkeeper Guillermo Ochoa, who kept two cleansheets in four matches and was one of his nation’s star performers before losing out to the Netherlands via late goals from Wesley Sneijder and Klaas-Jan Huntelaar, also missed out on a nomination.