Premier League champions Manchester City have completed the signing of 32 year old goalkeeper Willy Caballero from Spainish La Liga club Malaga for a fee of £5.6m and £3.2m in add-ons.

Caballero’s arrival at the Etihad Stadium sees the goalkeeper reuniting with Man. City manager Manuel Pelegrini who had signed him from Elche while he was Malaga manager. 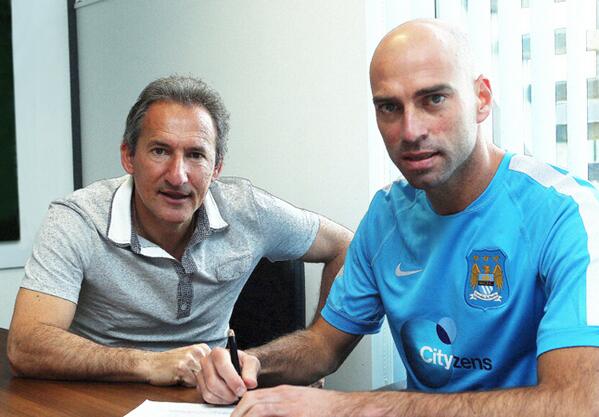 The Argentine goalkeeper becomes the third signing made by Man. City so far following the arrivals of defenders Fernando from FC Porto and Bacary Sagna on a free transfer from Arsenal.

After signing a three-year deal with the club, Caballero stated ”This is a new challenge and a new league for me. I have been doing well in the previous years and my goal is to go on and hopefully perform at the same level for City.”

He also stated his ambition to usurp Joe Hart as first-choice keeper, ” City already have a great goalkeeper in Joe Hart, but I will try and compete for the number one spot. I will do my best in the training sessions.”

Caballero was part of the Malaga team that reached the quarter-finals of the UEFA Champions League in 2012/13, setting a club record of 480 minutes without conceding a goal then.