Exactly 20 years after their first ever meeting in the World Cup, the Super Eagles of Nigeria come up against the Albiceleste of Argentina at 5p.m. needing to avoid defeat to guarantee progress to the knockout stage from Group F.

A 2-1 win for Argentina back in 1994 saw both nations qualify for the second round then and while Argentina have guaranteed their last 16 place, Nigeria still have a little way to go before reaching the knockout stage for the first time since the 1998 World Cup in France.

Stephen Keshi’s men could however still qualify if they lose to Argentina, given Iran do not win their final group match against already eliminated Bosnia-Herzegovina.

Argentina have a fit squad available but could be worried by a lack of firepower upfront as none of Sergio Agüero, Gonzalo Higuaín, Rodrigo Palacio and Ezequiel Lavezzi have failed to score so far while Lionel Messi has two of Argentina’s three goals with the third coming through an own goal against Bosnia.

The other worry for Alejandro Sabella would be making a slow start to the match as Argentina have in their two matches so far, which could be punished by Nigeria if the Super Eagles start the match in the manner they started in the 1-0 win over Bosnia. 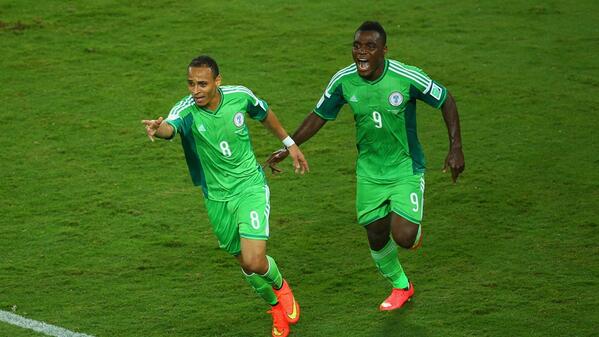 Osaze Odemwingie’s pace along with Emmanuel Emenike’s stamina proved a handful for the Bosnian defence and could prove likewise against the Argentines, more so if the third man in attack (Ahmed Musa or Victor Moses) are in like form.

The trio would be crucial to Nigeria’s quest to get a World Cup win over Argentina to end a run of three losses and finish top of the group, which would likely mean a less difficult second round match.

Nigeria’s weakness so far has been in midfield where John Mikel Obi and Ogenyi Onazi would need to be more mobile against Argentina than they have been so far at the mundial.

Michael Babatunde was solid in midfield last time out against Bosnia but is a doubt for the Argentina encounter with a minor injury.

In defence, Joseph Yobo could earn his 99th cap but would be more keen to keep a third cleansheet for Nigeria as would goalkeeper Vincent Enyeama who is the only goalkeeper yet to concede in Brazil.

Speaking ahead of the match where he will earn a 93rd cap, Enyeama stressed that it would be a mistake for his teammates to focus only on Messi.

”Everyone is talking about Messi but there is Higuain, Agüero, Angel di Maria, there’s a whole lot of players. That is what matters, we are going to stop the team of Argentina not Messi. Messi is a genius and one of the greatest players football has produced but you can’t rule out other players.”

Real Madrid winger di Maria however feels differently, stating ”Maybe this side has more skilful players than that one, but what really matters is the support we give [Messi]. In the long run, that’s the most important thing for all of us.”

Nonetheless coach Stephen Keshi stated ahead of the match that the Super Eagles fear no team at the World Cup as finishing second could mean facing a rampant France side.

”We have not come to the World Cup to run away or shy away from any team, we have to play our football. If it so be that we might [face] France after this game so be it. We are here to enjoy what we know how to do and that is play football and that is what we will do.”