Greece and Japan remain with a slim chance of progressing to the second round of the FIFA World Cup after playing out a largely plucky goalless draw in a Group C match in Natal.

Chances were at a premium in the match, with Japan lacking a cutting edge with their final touch while Greece were content with soaking up the pressure and counterattacking when possible.

Panagiotis Kone tried his luck from 40 yards for Greece in the 10th minute but the effort was easily dealt with by Eiji Kawashima in the Japan goal.

Japan’s Yuya Osako came closer to breaking the deadlock for Japan 10 minutes later from a much closer range but his curling effort sailed just wide of the Greek goal.

Greece then saw striker Konstantinos Mitroglu go off with an injury in the 35th minute, to be followed three minutes later by captain Konstantinos Katsouranis who received a second booking as the first half ended goalless. 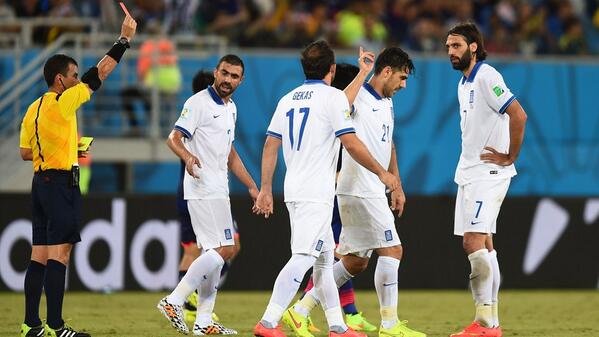 The second half began with Georgios Samaras’ audacious attempt right from the halfway line going just wide after spotting the Japanese goalkeeper still walking to his post after the referee had blown for the start of the half.

Japan’s man advantage began to tell in possession afterwards, with the Asians dominating proceedings but failing to break down a resolute Greek side.

The 2004 European champions would then come closest to scoring from a cornerkick just before the hour mark, only for substitute Theofanis Gekas’ goal-bound header to be kept out by the Japan goalkeeper.

Yoshito Okubo then missed a glorious chance to score for Japan 10 minutes later, shooting Atsuto Uchida’s square ball over with the goal at his mercy.

Greek goalkeeper Orestis Karnezis was on hand to keep out efforts from Okubo and a Yasuhito Endo freekick as the match inevitably ended goalless.

The result leaves both nations with a point each, behind Cote D’Ivoire with three points and Colombia – who have now booked a second round place courtesy of the draw – who lead Group C with six points.