England played out a dramatic 2-2 draw against Ecuador while Italy were left disappointed in a draw with Luxembourg as preparations for the 2014 World Cup in Brazil hit the final stages. 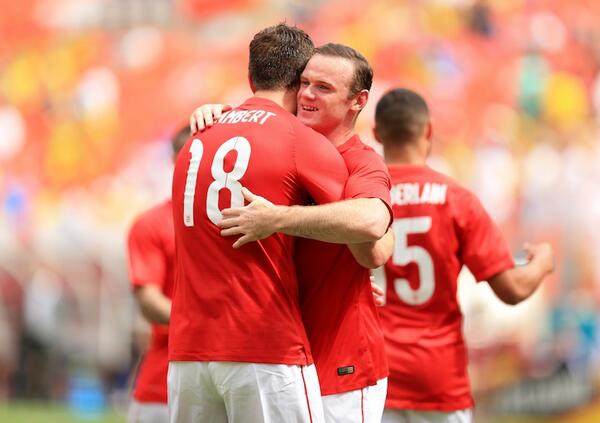 Lambert, who sealed a move to Liverpool on Monday, put England ahead six minutes into the second half but a fierce shot from Michael Arroyo ensured Ecuador earned a draw in an evenly contested encounter.

Both nations would also finish the match with 10-men after Raheem Sterling and Antonio Valencia were sent off after 78 minutes after an altercation between both players following Sterling’s rash tackle on Valencia, who reacted badly.

England though would be more worried about Alex Oxlade-Chamberlain’s condition after the Arsenal midfielder was taken off with a knee injury in the second half.

Elsewhere, Claudio Marchisio put Italy ahead after just nine minutes but the Azzuri were unable to add to the lead, with Mario Balotelli and Antonio Candreva being denied by the woodwork in the second half.

Italy would end up rueing the missed chances that came their way as Maxime Chanot headed in an unlikely equaliser five minutes from time to earn Luxembourg a 1-1 draw in Perugia.

Italy will fly out to Brazil on Thursday and play Brazilian club Fluminense in their final warm-up match before kicking off their World Cup campaign with a Group D match against England, before meeting Uruguay and Costa Rica.

In another friendly match played tonight, goals from Arjen Robben and Jeremain Lens gave Netherlands a 2-0 win over Wales with Robin van Persie an injury concern for the Dutch after picking up a groin strain in the match.

And in Geneva, Algeria got a 2-1 win over Romania in a match disrupted by unruly behaviour from spectators, which led to the match being suspended in the 43rd minute and Algeria coach Vahid Halilhodzic appealing to the fans for calm.