Atletico Madrid striker Diego Costa is set to complete a £32m transfer to Chelsea after passing a medical with the London club today. 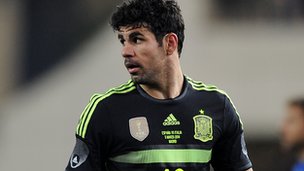 The 25 year old striker, who is currently with the Spanish national team squad for the 2014 World Cup in Brazil, is however yet to negotiate personal terms though Chelsea have met his buy-out clause.

Diego Costa scored 36 goals for Atletico last season as the Spanish club won a first La Liga title since 1996 but fell short of completing a historic double after losing 4-1 after extra-time to Real Madrid in the UEFA Champions League final in May.