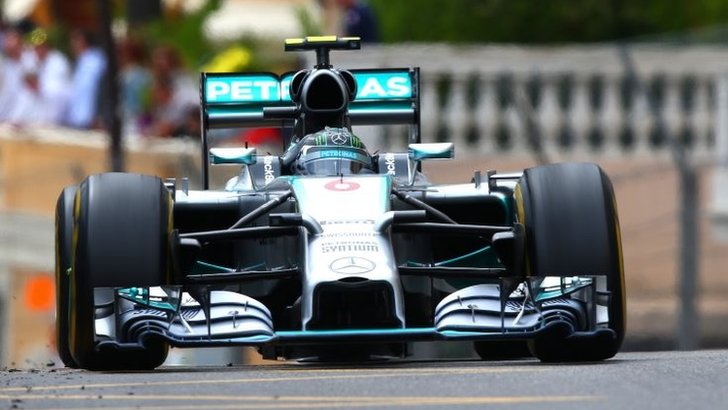 Rosberg started the race in pole position ahead of Hamilton, after being found not to have intentionally brought qualifying on Saturday to a premature end at a stage when Hamilton was on course to beat Rosberg’s time and claim pole position.

The starting places proved crucial in the race, as Rosberg kept Hamilton at bay all through the race to claim his second grand prix win of the season and also reclaim leadership of the championship.

Rosberg now has 122 points on the championship rankings while Hamilton drops to second with 118 points. Both drivers ensured Mercedes widened its lead on the contructors’ table with 240 points, 141 points ahead of Red-Bull Racing with 99 points.

The win maintains Mercedes’ dominance of the F1 season, having won all six races so far with both their drivers finishing first and second in five of the six races.

Hamillton on his part saw his challenge of Rosberg in the race fade away in the final laps due to vision problems, going from being under a second behind his teammate to finishing 9.2 seconds behind.

And for moments, it looked as though Hamilton would end the race in third place as Red Bull’s Ricciardo capitalised on Hamilton’s poor vision in the latter laps to close a 13-second gap between them but fall just short of passing the Briton at the end of the race.

Nonetheless, Ricciardo would be content to have claimed a second podium finish in his debut season and keep Red-Bull in a respectable position on the constructors’ table.

Ricciardo’s teammate and defending world champion Sebastien Vettel on his part was forced to retire after eight laps due to a power unit problem with his car.

Vettel, who has had a disappointing season so far, was one of eight drivers that did not finish the race. Force India’s Sergio Perez retired in the opening lap after being hit by Jenson Button who finished sixth.