Paris St. Germain striker Zlatan Ibrahimovic has emerged as the 2013/14 Ligue 1 Player of the Year for a second season running in a ceremony held on Sunday evening.

The Swedish star also claimed the award for goal of the year thanks to his goal against Bastia. Ibrahimovic was also named in the Ligue 1 team of the year having scored 25 league goals. 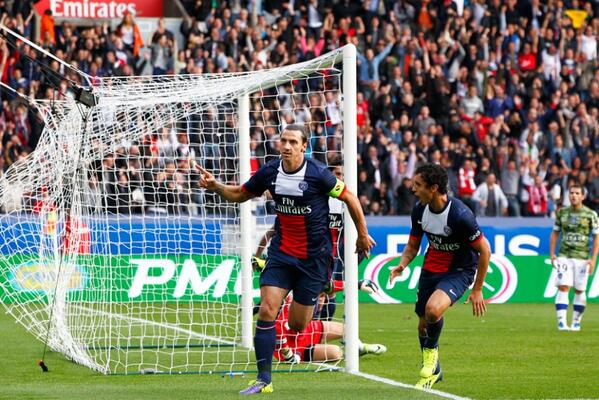 Ibrahimovic, who joined PSG from AC Milan in the summer of 2012, is in team of the year along with five of his PSG teammates including Italian midfielder Marco Veratti, who was also named the UNFP young player of the year.

Others are PSG captain Thiago Silva, Thiago Motta and record signing Edinson Cavani, as well as goalkeeper Salvatore Sirigu who was also named goalkeeper of the year ahead of Lille goalkeeper Vincent Enyeama who was favourite for the award.

Sirigu has kept 19 cleansheets for PSG in Ligue 1 this season while Enyeama has kept 21 cleansheets so far this season, the joint highest in Europe alongside Morgan de Sanctis of Italian club AS Roma.

Lille coach Rene Girard was however named coach of the year ahead of PSG coach Laurent Blanc, Remy Garde of Olympique Lyon and Claudio Ranieri of AS Monaco.