Floyd Mayweather jr. won a keenly contested bout at the MGM Grand Arena in Las Vegas after outpointing Marcos Maidana of Argentina to unify the WBC/WBA welterweight titles and maintain his unbeaten record. 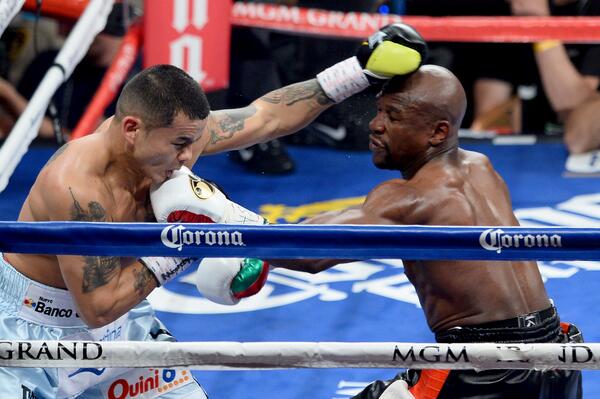 37 year old Mayweather, whose professional record now reads 46-0, was however second best in much of the opening five rounds with 30 year old Maidana opening a cut over Mayweather’s right eye during the fourth round.

Mayweather would find his fists from the sixth round though and did just enough to claim the two belts at stake going by the judges’ scorecards which read 114-114, 117-111 and 116-112 in Mayweather’s favour at the end.

The final result however did not go down well with Maidana, who protested vainly and appeared to seek a rematch with Mayweather, a proposition that remains hanging at the moment.

Meanwhile in another welterweight bout at the MGM Grand, Britain’s Amir Khan easily won his match-up against American Luiz Collazo with the judges scoring the fight 117-106, 119-104 and 119-104 in Khan’s favour.

With the win, Khan remain’s on course for a title fight against Mayweather though the latter has just three fights left to fulfill in his current contract with American television network.