Just in: COVID-19 cases surge in Kano as Nigeria’s total jumps to 2170

Just in: COVID-19 cases surge in Kano as Nigeria’s total jumps to 2170 Kano leads for the second day as Nigeria Centre for Disease Control, NCDC, confirmed 238 new cases of Coronavirus on Friday evening.
The confirmed cases bring the total number of the infections in the country as at 30 April to 2170.
However, 351 of the patients have been discharged while 68 deaths have been recorded.
According to NCDC, 92 of the new cases are in Kano while 36 are in Federal Capital Territory, FCT.
Also, 30 of the new cases are in Lagos, 16 in Gombe, 10 in Bauchi, eight in Delta, six in Oyo, five each in Zamfara and Sokoto, four each in Ondo and Nasarawa, three each in Kwara, Edo, Ekiti, Borno, two in Adamawa and one each in Niger, Imo, Ebonyi, Rivers and Enugu.
See breakdown of cases by state as at May 1, 2020 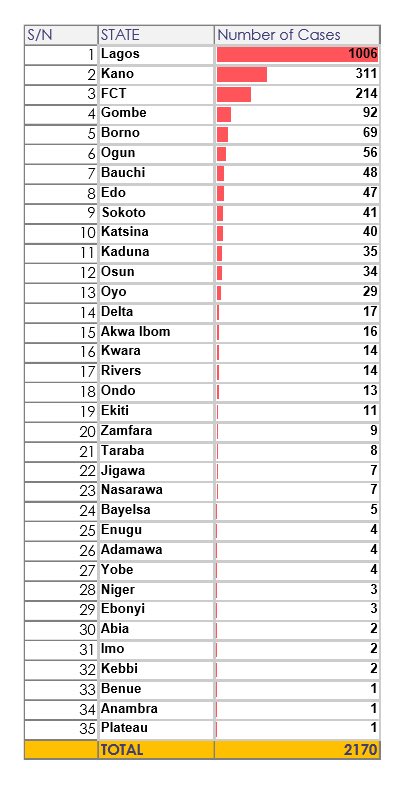