Manchester City put in a largely sub-par display as West Ham United claimed a 2-1 win over the champions in the Premier League’s early kick-off at Upton Park on Saturday. 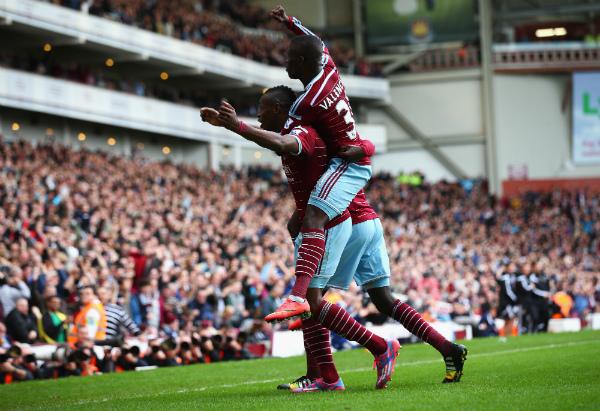 Manuel Pellegrini’s side, which squandered a two-goal lead at CSKA Moscow on Tuesday, went into the West Ham match looking to close the gap on league leaders Chelsea to two points.

And the early exchanges showed City’s intent as Sergio Agüero, with five goals in his last two matches, had a deflected shot saved by West Ham goalkeeper Adrian in the second minute while David Silva fired a freekick just over four minutes later.

West Ham’s first chance of the match came nine minutes in, when Joe Hart had to track back to tip a looping effort from Diafra Sakho over for a cornerkick, which came to nothing.

Some 10 more minutes and the Hammers found a way past Hart in sublime manner as Alex Song’s through ball released Enner Valencia, who squared the ball for Morgan Amalfitano to tap home.

Valencia saw a first-time effort go just wide of goal minutes before half-time while Agüero had a snapshot on the stroke of half-time kept out by Adrian to ensure West Ham went into the break in front.

West Ham threatened to add a second early in the second half but Stewart Downing lashed a close range effort wide while Diafra Sakho barely missed the goal just before the hour mark.

Momentum shifted to the visitors as Agüero had three attempts on the hour mark kept from going in, before the Argentine crashed an effort onto the crossbar from six yards out three minutes later.

The Argentine striker and David Silva soon combined to set up Yaya Toure whose effort grazed the crossbar, a moment City would be made to rue just a minute later. 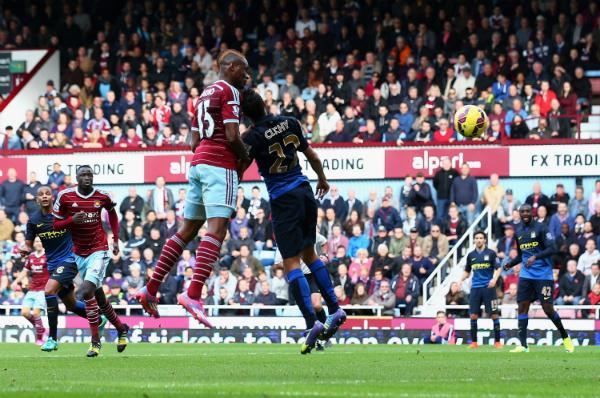 A cross from Downing was met with a powerful header by Sakho, which was counted as a goal despite Joe Hart’s desperate effort at keeping the header out. Sakho’s goal makes him the first ever West Ham player to score in each of his first six appearances for the club in the Premier League.

West Ham’s celebrations were cut short just two minutes later as Silva pulled a goal back with a curling effort to set up a tense finale which the Hammers saw through to claim a big scalp.

The win lifts West Ham to fourth place for the moment with 16 points, a point behind City that began the weekend in second place but could now end up eight points off the pace in third.

Meanwhile, the result in the early kick-off means Southampton could take second place from City when the Saints host Stoke City in one of four Saturday afternoon kick-offs, with Swansea to host Leicester City in the day’s evening kick-off at the Liberty Stadium.