Paris St. Germain marked a return of the French top flight from the international break with a dramatic 3-1 win away at RC Lens at the Stade de France in Paris on Friday.

The encounter in Paris saw three players get sent off, as PSG came from a goal down to claim a win which closed the gap on league leaders Olympique Marseille to four points.

PSG made a bright start to the match but against the run of play, Adamo Coulibaly gave Lens the lead in the 10th minute off a counterattack which began after Edinson Cavani was denied at the other end.

Cavani was denied again midway through the first half but PSG did not have to wait long before finding a way back in the match through Yohan Cabaye’s effort into the bottom corner just before the half-hour mark. 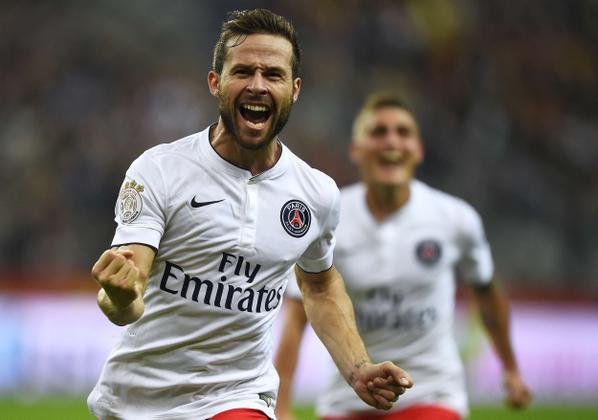 Having had a hand in the equaliser, Brazilian full-back Maxwell benefitted from a Marco Veratti shot being palmed to his path by the Lens goalkeeper by lobbing in an effort from 35 yards into the top corner to put the champions in front after 33 minutes.

The second half saw three players being sent off in six minutes, with Lens’ Jean-Philippe Gbamin first to go off after bringing down Cavani in the area in the 53rd minute.

The PSG striker picked himself up and converted the spot-kick, only for the Uruguayan to get sent off himself after being booked twice in the minute after scoring by referee Nicholas Rainville, first for his celebration then for his reaction to the first booking.

The numerical parity of both sides was however gone again three minutes later when Jérôme Lemoigne was sent off just for tangling with Cabaye.

PSG would see out the match and maintain its unbeaten start to the Ligue 1 season, usurping Bordeaux for second spot with 18 points after 10 matches while Lens remain in the relegation zone in 18th with eight points.