Goals in each half from Eden Hazard and Diego Costa maintained Chelsea’s unbeaten start to the Premier League season in a 2-0 win over Arsenal in a London derby at Stamford Bridge on Sunday.

A keenly contested opening half-hour of the match saw managers of both sides shove each other and the players go on the brink of getting sent off as the tackles crunched in. 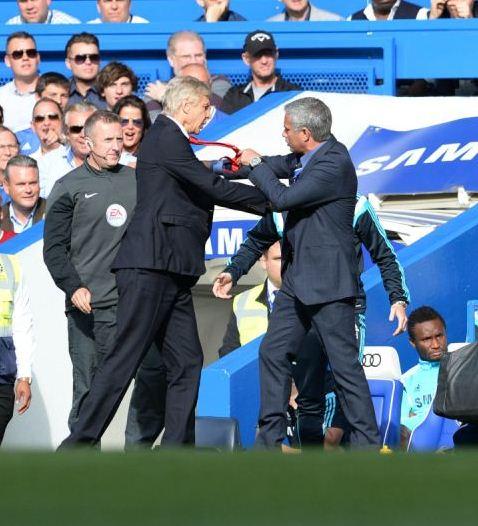 Inevitably it was a foul that led to the opening goal, as Laurent Koscienly was penalised for a foul on Hazard in the area, with the Belgian star sending Wojciech Szczesny the wrong way to put the Blues ahead after 27 minutes.

Cesar Azpilicueta then saw an effort saved by Szczesny a minute later while Petr Cech, on for the injured Thibaut Courtois moments before, had to be alert to thwart Jack Wilshere when the Arsenal midfielder found his way into the Chelsea area.

The second half saw the Gunners continue to see more of the ball but fail to create clear-cut chances, while Chelsea came close to doubling its lead just before the hour mark when a Hazard shot deflected off Mathieu Flamini towards goal but bounced out off Szczesny’s arm.

Out of nothing the game was sealed in the 78th minute when Cesc Fabregas found Diego Costa, with the Spanish striker lobbing the ball over Szczesny for his ninth league goal in seven matches.