Cameroun Humbled Out of World Cup by Croatia

Cameroun Humbled Out of World Cup by Croatia

Cameroun’s participation at the ongoing FIFA World Cup was cut short after a calamitous 4-0 loss to Croatia in Manaus ensured the Indomitable Lions will not go past the group stage. 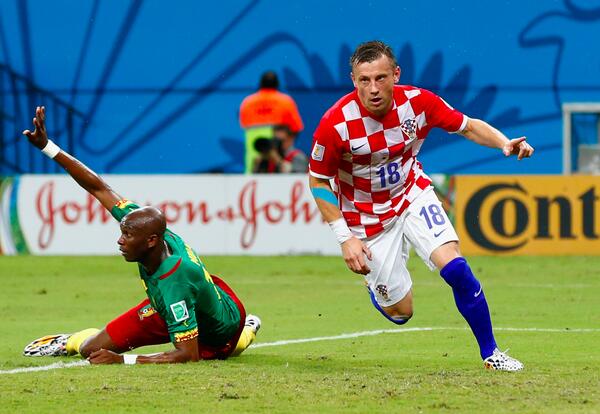 Samuel Eto’o was left on the bench for Cameroun’s second Group A encounter with a knee injury while Mario Mandzukic started for Croatia after missing the opening day loss to Brazil through suspension.

Despite a fast start from the Camerounians, it was the Croatians that took the lead in the 11th minute through Ivica Olic who struck home after being set up well by Ivan Perisic.

Croatia dominated from then on but failed to convert their chances, with Perisic firing into Charles Itandje’s hands from four yards out while Ivan Rakitic’s long rnge shot was dealt with easily in the minutes after Olic’s goal.

Things went sour for Cameroun who were reduced to 10 men five minutes from half-time when Alex Song received a straight red card for elbowing Mandzukic from behind.

Song’s red card, along with the scene of Stephan Mbia and Benjamin Moukandjo arguing with each other a moment earlier after getting in each other’s way for a ball, summed up Cameroun’s night.

Perisic added a second for Croatia two minutes into the second half while Mandzukic scored a brace soon after to wrap up the comprehensive win, heading home a corner before tapping in a rebound after Itandje could only parry substitute Eduardo’s shot.

Cameroun fashioned a couple of late chances which came to nothing and ended the match with Moukandjo again arguing with Benoit Assou-Ekotto in the 90th minute as Cameroun crashed out in unsavoury manner.

Cameroun coach Volker Finke stated after the match ”It’s always difficult to play with ten men, but that’s still no excuse for tonight’s performance. We need to move on and look to the future, because this team is full of promising players.”

On his part, Croatia’s Niko Kovac said ”We have to put this victory to the back of our minds for now, because our hardest challenge is still to come. The match with Mexico is going to be our cup final.”

The win put Croatia in third with three points, behind hosts Brazil and Mexico with four points apiece, leaving Croatia needing only a win in their final group match against Mexico to qualify.