Old hoodoos were broken in London and Madrid, new records were set in Turin and Paris, while the king of clay was humbled in Rome over an eventful last weekend in sports.

In Italy, Serena Williams continued her preparations for the French Open by claiming her third Rome Masters title on Saturday with a 6-3 6-0 win over Italian Sara Errani. And on the two previous occasions Serena won the Rome title, she went on to win the French Open.

Such omen may apply for Novak Djokovic after the world number two came from a set down to overcome world number one Rafael Nadal and claim his third Rome Masters title on Sunday, inflicting only a second defeat at the tournament for Nadal since the Spaniard first won it in 2005.

Djokovic’s 4-6 6-3 6-3 win on Rome’s clay sets up both players for the coming French Open in June, a grand slam Nadal won for a fourth successive time last year and would be out to not only defend this year but also to create a record for most singles titles won at Roland Garros; his defeat of Djokovic in 2013 equalling Max Decugis’ record of eight titles.

In the French capital meanwhile, Paris St. Germain set new records after wrapping up their season with a 3-0 win at home to Montpellier in Ligue 1 to finish with 89 points – the most points won in a season – from 27 win – the mosts wins by a club in a season.

Not far away in Turin, Juventus ended the Italian season with a 3-0 win as well, to set a new Serie A record points haul of 102 points. Juve also ended the season with a perfect home record, winning all 19 league matches played at the Juventus stadium.

It is also the third successive season Juve has won the Serie A title and a record 32nd time the Old Lady have been crowned champions of Italy. So title success is relative regularity for fans of the Turin club.

As it is for fans of Bayern Munich, who saw their club edge past arch-rivals Borussia Dortmund with a 2-0 win to claim the German Cup after extra-time and complete a domestic double, having win the Bundesliga title back in March.

On the other side of that spectrum are fans of north London side Arsenal and those of Madrid’s second club Atletico, as both sets of fans have endured long waits to see their respective clubs taste similar success their counterparts at Juve and Bayern know so well of.

For the Arsenal fans, their club’s season was summed up in a pulsating two hours of the FA Cup final at Wembley, watching their club go 2-0 down against Hull City in the opening nine minutes before clawing their way back through goals in each half from Santi Cazorla and Laurent Koscielny to force the match to extra-time.

Aaron Ramsey’s strike after 109 minutes proved to be the Cup winning goal for Arsenal, a club that had before then gone nine years without a trophy with the last title won coincidentally the 2005 FA Cup. 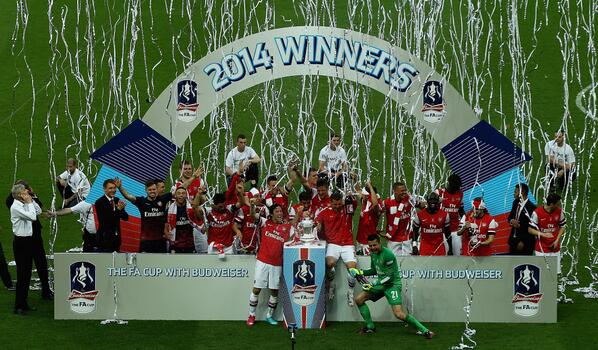 Winning the 2014 edition may serve as a pivot on which more major titles would be won by the club, whether that would be under the helm of long-time manager Arsène Wenger remains to be seen.

As for Diego Simeone, it may well be the start of a long spell as manager of Atletico Madrid after leading the modest club to a first Spanish league title win in 18 years with a 1-1 draw at second placed Barcelona and the standing ovation from the 98,000 strong Nou Camp crowd for Simeone’s team was a befitting end to a fairytale domestic season for Atletico.

The last time Atletico won the league title, Simeone was a player at the climax of his time at Madrid’s second club. By Saturday however, Atletico may well make themselves the first club of Madrid if they manage to defeat Real Madrid in the final of the UEFA Champions League.

But then again, Atletico already have won over majority of neutrals with their relentless style of play (and somehow holding Barcelona to a draw on the six occasions they met).

Reaching Saturday’s showpiece alone is a major achievement for Atletico, winning it however…